Cross In The Heavens 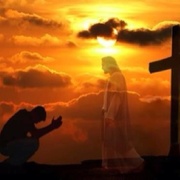 Meditations to edify, exhort, and raise the spiritual cousciousness in Christ Jesus. 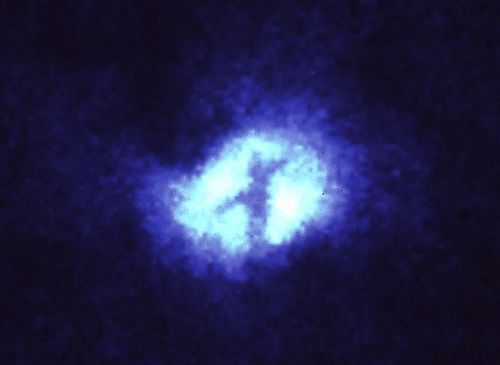 This image of the core of the nearby spiral galaxy M51, taken with the Wide Field Planetary camera (in PC mode) on NASA's Hubble Space Telescope, shows a striking , dark "X" silhouetted across the galaxy's nucleus. The "X" is due to absorption by dust and marks the exact position of a black hole which may have a mass equivalent to one-million stars like the sun. The darkest bar may be an edge-on dust ring which is 100 light-years in diameter. The edge-on torus not only hides the black hole and accretion disk from being viewed directly from earth, but also determines the axis of a jet of high-speed plasma and confines radiation from the accretion disk to a pair of oppositely directed cones of light, which ionize gas caught in their beam. The second bar of the "X" could be a second disk seen edge on, or possibly rotating gas and dust in MS1 intersecting with the jets and ionization cones.

Sort of looks like a cross to me. Perhaps, the Lord is trying to give the world a hint.

Holy Spirit, I pray for the joy, the wine, the music, the dancing and the freedom that is in the Father's house.Dear Holy Spirit I ask for a release upon me holy laughter and prophetic laughter. May…Continue

Hello all.My name is Minister Roger Urbina.I just joined this group. I saw the picture of the cross in the sky/clouds. I though you might find these pictures and video interesting. God bless you, all!Continue

RISE UP AND COME OUT - Meditations

"Bless the LORD, O my soul, and forget not all his benefits: Who forgives all your iniquities; who heals all your diseases; Who redeems your life from destruction; who crowns you with lovingkindness…Continue

FLOWING OUT OF HIS WORD - Meditations

The Holy Spirit’s desire is that we live every day in the fullness of the Lord, by seeing above and beyond what we can do, and that Jesus would receive glory and honor through His great power that…Continue

You need to be a member of Cross In The Heavens to add comments!

FACING OUR NEED FOR GRACE

Matthew 6:13 - "And do not lead us into temptation, but deliver us from the evil one."

There is no temptation or sin in heaven. This prayer does not imply that God wants to tempt us. We know from James 1:13 that it is impossible for God to entice us to sin.
This kind of praying is important because it requires us to face our need for grace. It helps us to align our heart with heaven -- one of absolute dependency on God.

The phrase "deliver us from evil", as it is traditionally rendered, actually means, "deliver us from the evil one." A heart modeled after heaven has great success in spiritual warfare. Jesus was able to say, "satan has nothing in me."
The believer is to be completely free from all satanic influence and attachments. That is the cry voiced in this prayer.

Genesis 7:4 - "For yet seven days, and I will cause it to rain upon the earth forty days and forty nights; and every living substance that I have made will I destroy from off the face of the earth."

The ark had only one door, symbolic of Christ who is the only door to reach God. There came a day, prior to the flood, when they were told to enter the ark, and shut themselves in.

Just as Noah was able to rest within the ark, secure from the waters of death, so we can be assured of spiritual rest, for our lives are hidden with Christ in God.

The ark was a secure refuge from certain death; it was a type of Christ, who provides spiritual refuge for all believers. Noah's obedience to the command of God to build and enter the ark typifies the believer who, by faith, receives Christ and is saved from judgment (spiritual death).

John 14:6,7 - "Jesus saith unto him, I am the way, the truth, and the life: no man cometh unto the Father, but by me. If ye had know me, ye should have known My Father also: and from henceforth ye know Him, and have seen Him."

Unless we can be corrected, unless we are seeking God for an unfolding revelation of His son, our so-called "faith" may be, in reality, just a lazy indifference, a deception concerning the things of God. Subconsciously, we may actually want a dead religion so we do not have to change. True faith is freighted with the power of God.

Timothy 3:5 - "Having a form of godliness, but denying the power therof: from such turn away."

Revelation 4:6 - Before the throne there was, as it were, a sea of glass like crystal.

The glass sea is a symbol: there are no ripples, no waves, no anxieties troubling God. The Lord is never worried, never in a hurry nor without an answer. The sea around Him is perfectly still and totally calm. All our victories flow out from being seated here with Him.

Hebrews 3:6 - "Whose house we are, if we hold fast our boldness and the glorying of our hope firm unto the end."

Many believers, who for a time run well, get so entangled in the busines or the pleaseure of life, the literature, or the politics, or the friencships of the world, that all the life and the power of their profession is lost.

They do not understand that they must always walk by faith (in God's CALLING on their life) -- that every day and every hour nothing can help us but a clear, definite, habitual faith in God's power and working, as the only possibility of growth and progress.

The powers of sin and Satan, of the world and the flesh, are so great, only the believer who is bold and glories in his ope upon what God will do will have strength to resist them. Only the believer who has leared to be BOLD with God, and to Gory in Him -- that faith becomes a joy, and hope is a GLORYING in God, that he can be more than a conqueror.

INTO ACTION:
What is God's PURPOSE for my life?

What is God calling me to do TODAY?

What action am I taking right NOW.

I saw this planet in the ministry DVD of Louie Gigilo. The movie (actually a documentary about God) is called (I think) "indescribable" and it's incredible!! †

Holy Spirit, I pray for the joy, the wine, the music, the dancing and the freedom that is in the Father's house.Dear Holy Spirit I ask for a release upon me holy laughter and prophetic laughter. May freedom, healing, and deliverance come out of Your…Continue