PARABLE OF THE UNJUST STEWARD

Luke 16:1-13 - 16 Now Jesus was also saying to the disciples, “There was a certain rich man who had a manager [of his estate], and accusations [against this man] were brought to him, that this man was squandering his [master’s] possessions. 2 So he called him and said to him, ‘What is this I hear about you? Give an accounting of your management [of my affairs], for you can no longer be [my] manager.’ 3 The manager [of the estate] said to himself, ‘What will I do, since my master is taking the management away from me? I am not strong enough to dig [for a living], and I am ashamed to beg. 4 I know what I will do, so that when I am removed from the management, people [who are my master’s debtors] will welcome me into their homes.’ 5 So he summoned his master’s debtors one by one, and he said to the first, ‘How much do you owe my master?’ 6 He said, ‘A hundred measures of [olive] oil.’ And he said to him, ‘Take your bill, and sit down quickly and write fifty.’ 7 Then he said to another, ‘And how much do you owe?’ He said, ‘A hundred [c]measures of wheat.’ He said to him, ‘Take your bill, and write eighty.’ 8 And his master commended the unjust manager [not for his misdeeds, but] because he had acted shrewdly [by preparing for his future unemployment]; for the sons of this age [the non-believers] are shrewder in relation to their own kind [that is, to the ways of the secular world] than are the sons of light [the believers]. 9 And I tell you [learn from this], make friends for yourselves [for eternity] by means of the wealth of unrighteousness [that is, use material resources as a way to further the work of God], so that when it runs out, they will welcome you into the eternal dwellings. 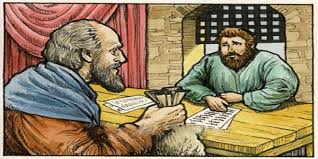 The Unjust Steward represents primarily the Pharisees and scribes in their teaching and ministerial functions. But though spoken in the hearing of the Pharisees, the parable was addressed, not to them, but “to the disciples.” And the reason of this is obvious. They, too, were called to be “stewards;” they, too, collectively and individually, would have to give an account of their stewardship. But if this is what the steward represents, then the rich man, like the “house-holder” in other parables, can be none else than God, who both appoints the stewards and calls them to account. In the further extension of the parable it is, of course, applicable to all who have any “goods” entrusted to them, any gifts, opportunities, and their calling and ministry in the great kingdom of God. - Ellicott's Commentary for English Readers

The unjust steward is not set before us as an example in cheating his master, or to justify any dishonesty, but to point out the careful ways of worldly men. It would be well if the children of light would learn wisdom from the men of the world, and would as earnestly pursue their better object. The true riches signify spiritual blessings; and if a man spends upon himself, or hoards up what God has trusted to him, as to outward things, what evidence can he have, that he is an heir of God through Christ? The riches of this world are deceitful and uncertain. Let us be convinced that those are truly rich, and very rich, who are rich in faith, and rich toward God, rich in the calling in Christ, in the promises; let us then lay up our treasure in heaven, and expect our portion from thence. - Matthew Henry's Concise Commentary

PARABLE OF THE UNJUST STEWARD

Luke 16:1-13 - 16 Now Jesus was also saying to the disciples, “There was a certain rich man who had a manager [of his estate], and accusations [against this man] were brought to him, that this man was squandering his [master’s] possessions. 2 So he…Continue