John 15:12-15 - "This is My commandment, that you love one another as I have loved you. Greater love has no one than this, than to lay down one's life for his friends. You are My friends if you do whatever I command you. No longer do I call you servants, for a servant does not know what his master is doing; but I have called you friends, for all things that I heard from My Father I have made known to you."

SHOUT "GRACE" TO YOUR JERICHO WALLS

Joshua 6:2 - "And the Lord said unto Joshua, See. I have given into thine hand Jericho, and the king therof, and the mighty men of valor."

When the children of Israel entered the Promised Land ten cities stood as obstacles in their way. The first of these cities was Jericho. Israel was not yet an army -- they were simply a group of desert wanderers with a promise. They had no army. Their…

SIMPLICITY THAT IS IN CHRIST

2 Corinthians 11:3 -- "But I fear...your minds may be corrupted from the simplicity that is in Christ."

The problem is that we mistakenly strive for information when in reality we need revelation.

Ephesians 1:17,18 -- "That the God of our Lord Jesus Christ, the Father of glory, may give to you the spirit of wisdom and revelation in the…

Luke 10:38-42 - "As Jesus and his disciples went on their way, he came to a certain village where a woman named Martha welcomed Him in her home. She had a sister named Mary, who sat down at the feet of the Lord and listened to His teaching. Martha was upset over all the work she had to do; so she came and said, 'Lord, don't you care that my sister has left me to do all the work by myself? Tell her to come and help me!'…

Psalm 17:15 -- "As for me, I will behold thy face in righteousness: I shall be satisfied, when I awake, with thy likeness."

Many read the Scriptures simply to reinforce their current beliefs. Although they read the entire Bible, their mind only sees certain doctrines. Instead of believing what they read, they merely read what they already believe. Rarely do they find new truths in the…

John 3:8 - "The wind blows where it wishes, and you hear the sound of it, but cannot tell where it comes from and where it goes. So is everyone who is born of the Spirit."

The wind is known by its sound, and by its effect. Whenever the Spirit moves there is a spiritual sound coming from the spirit realm.
Spiritual sound is not random indefinite…

FINDING OUR PLACE OF DEPARTURE

1 Kings 19:9 "Then he came there to a cave and lodged there; and behold, the word of the LORD came to him, and He said to him, “What are you doing here, Elijah?"

Elijah had come to Horeb and lodged there in a cave. Soon, the word of the Lord came to him, “what are you doing here Elijah?”

"Awake, sleeper, and arise from the dead, and Christ will shine on you" (Ephesians 5:14).

Just because we walk and talk does not mean we are truly awake. Zechariah was not sleeping when an angel roused him "as a man who is awakened from his sleep" (Zechariah 4:1).

Perhaps we too need to be shaken from our…

Psalm 78: 9-11 - "The sons of Ephraim were archers equipped with bows, yet they turned back in the day of battle. They did not keep the covenant of God and refused to walk in His law; they forgot His deeds and His miracles that He had shown them."

FAITH THAT APPROPRIATES AND MANIFESTS

Luke 19:12,13 - He said: "A man of noble birth went to a distant country to have himself appointed king and then to return. So he called ten of his servants and gave them ten minas. 'Put this money to work,' he said, 'until I come back.'

A mina represents the truths of God's word, our inheritance in Christ, the love of God shed abroad in our hearts, and the covenant blessing that are…

"And He said to them, 'Why are you afraid? Do You still have no faith?'"

In Mark 4:35-41, we see Jesus giving the disciples an opportunity to step into storm-silencing dominion power and divine authority, but they do not quite get it at first. He responds…
Continue

John 2:3-5 - When the wine was gone, Jesus' mother said to him, "They have no more wine."
"Why do you involve me?" Jesus replied, "My time has not yet come." His mother said to the servants, "Do whatever he tells you."… 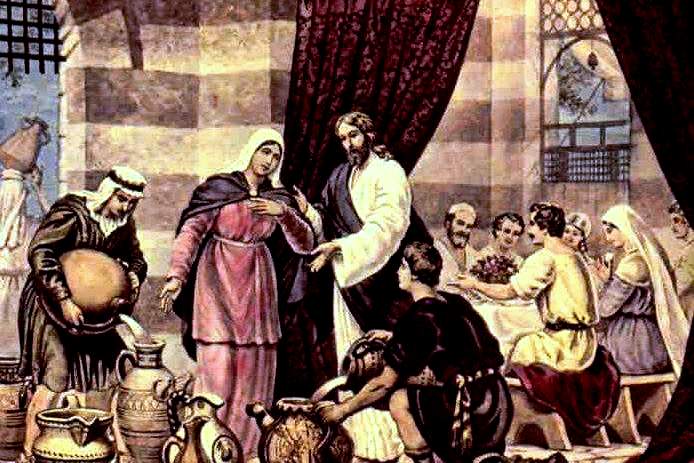 STEPPING OUT IN FAITH

Exodus 19:14 - "You have seen what I did to the Egyptians, and how I bore you on eagles' wings and brought you to Myself."

In facing their threshold or brink, marching through the "GATES" out of captivity in Egypt, Israel has to make a leap of faith (by obeying God's command to leave Egypt). If they took the leap of faith, would God come and bear them up on eagle's wings? God comes through…

TUNING IN TO GOD'S VOICE

He also said that His sheep hear His voice (John 10:27). Not hearing the Father speak, not understanding the voice of the Holy Spirit, is the root of many of life's problems. If we would only linger a little longer in His voice, then perhaps we would live great lives of blessing and purpose that yields fruit…

FAITH BUILDING OF YOUR SPIRIT

Matthew 12:34,35 -- ....."For out of the fullness (the overflow, the superabundance) of the heart the mouth speaks. The good man from his inner good treasure flings forth good things, and the evil man out of his inner evil storehouse flings forth evil things."

Words won't work without faith any more than faith will work without words! It takes them both to put the law of faith in…

2 Corinthians 10:4 - "The weapons we fight with are not the weapons of the world. On the contrary, they have divine power to tear down strongholds."

Wherever a stronghold exists, it is a demonically induced pattern of thinking. Specifically, it is a "house made of thoughts" which has become a dwelling place for satanic activity.
The strongholds upon…

"Blessed are those who have been persecuted for the sake of righteousness...for theirs is the kingdom of heaven." - Matthew 5:10

Outwardly when we are persecuted or suffer abuse - inwardly we experience "heaven" as God deals mightily with our soul, breaking its addiction to man's approval and liberating us to truly live for Christ.…

Mark 14:3,4 - "Jesus was in the house of Simon the leper, in Bethany; while He was eating, a woman came in with an alabaster jar full of a very expensive perfume, made of pure nard. She broke the jar and poured the perfume on Jesus' head. Some of the people there became angry, and said to each other, 'What was the use of wasting the perfume? It could have been sold for more than three hundred dollars, and the money given to the poor!' And they…

TAKING ACTION ON YOUR VISION

Ephesians 1:3,4 - "Blessed be the God and Father of our Lord Jesus Christ, who has blessed us with all spiritual blessings in heavenly places in Christ. According as he has chosen us in Him before the foundation of the world, that we should be holy and without blame before Him in love."

"that He would grant you, according to the riches of His glory, to be strengthened with power through His Spirit in the inner man, that the Christ may dwell, through faith, in your hearts, being rooted and founded in love, - Ephesians 3:16,17

As believers, we are rooted and grounded in His magnificent love (Ephesians 3:17). We have courage, the depth of which is confidence…