Isaiah 4:2-6 - "In that day the Branch of the LORD will be beautiful and glorious ..... When the Lord has washed away the filth of the daughters of Zion and purged the bloodshed of Jerusalem from her midst, by the spirit of judgment and the spirit of burning, then the LORD will create over the whole area of Mount Zion and over her assemblies a cloud by day, even smoke, and the brightness of a flaming fire by night; for over all the glory will be a canopy. There will be a shelter to give shade from the heat by day, and refuge and protection from the storm and the rain."

Song of Solomon 8:6 - “Put me like a seal over your heart, Like a seal on your arm. For love is as strong as death, Jealousy is as severe as Sheol; Its flashes are flashes of fire, The very flame of the LORD."

This verse says that the fire of love is actually the very flame of God. The best part about God’s fire is His fire of love. When we are touched by His fire He not only purges the dross out of our lives but He also consumes us with the fire of holy passion. God is looking to pull out His glory on the people who are consumed with one desire.

As we allow His love to consume us and everything in us that is not of Him, these flames of passion will begin to light fires that not only burn in our hearts, but turn us into torches of blazing light. The light in us will draw those who do not yet know Him into the flames of His presence.

Revelation 1:14 - "His head and hair were white like wool, as white as snow, and His eyes like a flame of fire."

2 Chronicles 16:9 - “For the eyes of the LORD move to and fro throughout the earth that He may strongly support those whose heart is completely His. You have acted foolishly in this. Indeed, from now on you will surely have wars.”

Jesus is described as having eyes like flames of fire. He is looking for those whose hearts are opened and turned toward Him.

The Lord wants to bring us to the place of the burning bush (Exodus 3:1-5). This revelation is what enables us to surrender all. It allows us to love and trust Him so completely that we lay down our agendas, turn aside from the everyday, and launch out into the miraculous. It is what ignites us to be His flames of fire that burn - so the world might know His light.

WITNESSING THE LOVE OF JESUS TO THE WORLD

1. I am a "human torch" that illuminates lost mankind.

2. I carry the power and anointing of the Kingdom of God.

3. I set myself on God’s alter today to allow myself to be consumed by His fire of purging and His fire of love.

4. I refuse to allow the move of God in me to be miscarried. 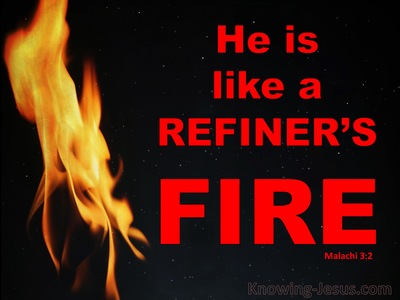