"He that believeth on me, as the scripture hath said, out of his belly shall flow rivers of living water." - John 7:38

Many needed breakthroughs for the Body of Christ are awaiting the release of this river we carry within.
Hearts clogged with unbelief, doubt, and pain through trauma will receive a visitation of His power that will release the wells within. Many in 2020 are going through fiery trials that are strategies from the enemy to cause fear and doubts to arise, to hinder or halt the flow of His Spirit. Many in the Body of Christ do not realize the hugeness and the power of the river they carry within.

UNBELIEF AND DOUBT
Although the river within each Believer is infinitely powerful, many are not releasing this river as it remains contained within instead of being released as an overflow. Unbelief and doubt have arisen in hearts due to long-standing difficult situations, traumas, and grief that caused their hearts to be wounded. All of these have caused the soil of the hearts of many Believers to become hardened, hindering the flow of the river within.
Many Believers, therefore, do not walk in the overflow of His power that they were destined to walk in. His Word, as it is released through affirmation, meditation, AND VISUALIZING THEMSELVES IN HIS WORD, breaks through the rocky soil of the heart, releasing healing to hearts that are wounded and simultaneously causing the river to flow untapped.

Jeremiah 23:29 says, "Is not My Word like fire," declares the LORD, "and like a hammer that breaks a rock in pieces?"

If you are in a barren place, where you do not feel the overflow of His river within you, the Lord is releasing this encouragement to you:

1. He is your ever-present help in trouble. In Psalms 46, He promises that He, Himself, will help you and He will release a river of gladness within you. Psalm 46:4-6 says, "There is a river whose stream makes glad the city of God, the holy place where the Most High dwells. God is within her, she will not fall. God will help her at the break of day."
As you become one with His Word, He ministers in the barren and rocky places of your heart. As you do so, His river of joy is released within to break the power of fear and desolation.

2. Hear the Lord's gentle warning to be careful of the condition of the soil of your heart. In Matthew 13:1-23, in the parable of the sower, as the seed was sown in 4 different soils, only one of them bore fruit.

The 3 soils that did not bear fruit represented hearts that the enemy stole the Word from as they experienced persecution, trials, and inability to allow the Word the Lord has spoken to them to take root. The soil of the heart that bore fruit was the heart that fully understood and received the Word of the Lord that was spoken to them and did not allow the cares and trials of the world to choke out the Word within them. In essence, a person's ability to release the river of God or anointing within them is determined by the condition of the heart.

Though you might be going through trials, these are the very conditions that will allow His river within you to flow as a powerful tsunami. In the natural, a tsunami is caused by a disruption or an earthquake. Supernaturally, the enemy attack that caused a disruption in your life will release the greatest tsunami of His Spirit through your heart as you allow the Lord to heal, strengthen and release His river within you! 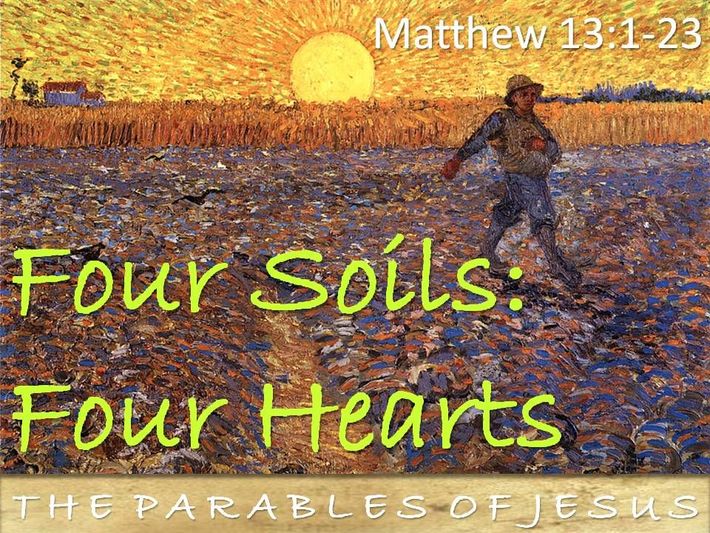