The word breakthrough comes from the Hebrew word "perets" which means "To break out." In the areas that we are believing God for breakthrough in, we should also believe Him to break out from the very center of the situation. Zephaniah 3:17 declares "the Lord thy God in the midst of you is mighty." In this verse the word midst means: the nearest part, that is, the center; the word mighty means: a powerful, warrior champion.

The Lord wants to come as a powerful, warrior champion to show Himself strong in the midst of all hindrances, obstacles and blockades that the enemy has erected to stop the flow of God's purposes.

Whether it's breakthrough in physical healing, financial provision, relationship issues, ministry or any number of areas, God's desire is to bring manifested breakthrough.

THE BATTLE OF JERICO:

The victory in Jericho was not the result of an advancing army breaking into the gates of the city. It was as God's people obeyed and followed His strategy that breakthrough came and the victory was won. Jericho had two walls, an inner and outer, with a combined thickness of 18 feet. Surely the inhabitants of Jericho never imagined that these walls would be breached, let alone be destroyed altogether in a moment of time. Our God is well able to bring breakthrough in the midst of impossible situations.

THE MANIFESTED POWER OF THE HOLY SPIRIT:

The Holy Spirit, the most powerful force in the universe, is very active on Planet Earth today. We often do not think of His power as being the exact same power that raised Jesus from the dead.

The declaration of Romans 8:11 is this: "But if the Spirit of Him who raised Jesus from the dead dwells in you, He who raised Christ from the dead will also give life to your mortal bodies through His Spirit who dwells in you."
We need to believe God and ask Him for the release of Holy Spirit power – the power of the resurrection in our lives.

Scripture also says that the anointing BREAKS the yoke. Many Believers these days are walking around with heavy yolks of everything from religious expectations to orphaned thinking and condemnation. God's desire is to manifest BREAKTHROUGH to obliterate yolks by the anointing (Isaiah 10:27).

There are times that the manifestation of breakthrough is going to come in the release of great peace into a situation.

In Mark 4, Jesus stood in the midst of a storm that the disciples thought was life-threatening. In the midst of that storm He declared, "Peace, be still" (verse 39).

It's interesting that the response of the storm was not to just ease up a bit, but the Bible says, "the wind ceased, and there was a great calm." God wants to bring great calm into the many storms of life that we face. Even if the circumstances of that storm do not change immediately, we can still receive "a great calm" deep inside our hearts.

Isaiah 43:19 - Nothing compares to what I'm going to do with you says the Lord! Behold, I am going to do a brand new thing with you personally. See, I've already begun to do it. Don't you see it?

In the land of New Beginnings, we must remove the masks and veils that have formed in the past season so we can now form our “true” identity for the future. Isaiah 41:15 ("Behold, I will make you to be a new, sharp, threshing instrument which has teeth; you shall thresh the mountains and beat them small, and shall make the hills like chaff") has become a keyword for us. Our Christ identity and authority in the invisible world will allow us to display the wisdom of God to the powers and principalities that have blocked us in past seasons.

Jesus says: 'You shall see the Heaven OPENED, and a way between Heaven and earth, between God and man, made clear. I am that way. I will open Heaven by My own blood.'

Your time in communion with the Lord will raise you to that "Come up here, let me show you something you didn't know before" place for substantial breakthrough.
"I saw a door open in heaven and heard the same voice speaking to me, the voice like a trumpet, saying 'Come up here: I will show you what is to come in the future.'" - Revelation 4:1

Lord, I ask you now to pour out the Spirit of the Overcomer. I lift up my head and receive the King of Glory to breakthrough so that I can break out. Lord, stir me out of the wilderness and grip me with a holy violence and jealousy to lay hold of my inheritance and DESTINY in Christ. I am available to do great exploits in Your Name! - Amen 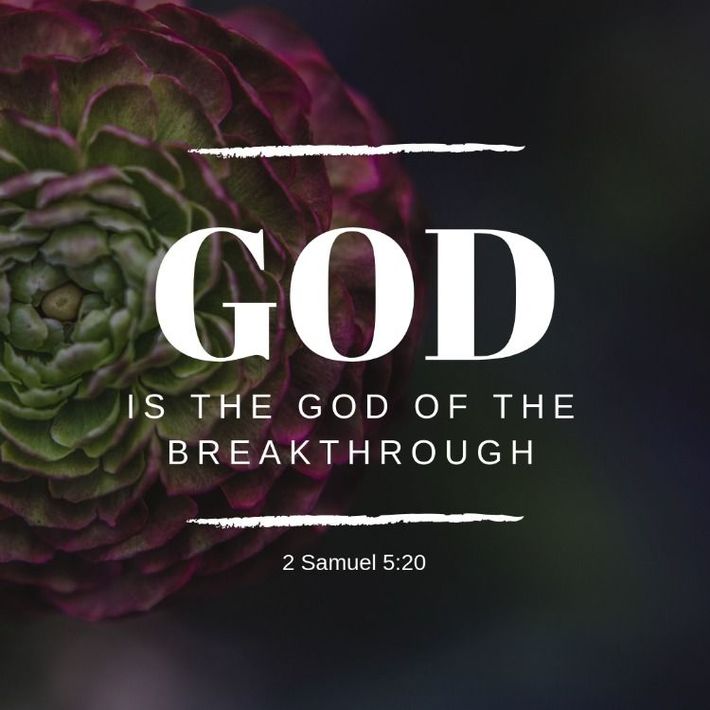