ESTABLISHING THE REALITY OF GOD’S KINGDOM

"Then war broke out in Heaven; Michael and his angels went forth to battle with the dragon, and the dragon and his angels fought. But they were defeated, and there was no room found for them in Heaven any longer" (Revelation 12:7-8 AMP).

Notice the phrase, "there was no room...for them in Heaven" --  the war against principalities involves displacement -- Christ filling the spiritual territories once held by satan.

Because this war in Heaven is difficult for us to comprehend, these questions arise:

How do angels and demons -- beings who do not die from wounds, wage war?

With what do they do battle?

And how do they conquer one another?

All spiritual warfare is waged over one essential question: Who will control reality on earth, Heaven or Hell?

When it comes to angelic and demonic warfare, the battle rests not in physical weaponry but in the power of agreement between mankind and the spirit realm. We read in Ephesians 6 (NKJV) that "principalities" and "powers" occupy the "heavenly places" (verse 12). But we read in Ephesians 1:10 that it is the Father's expressed purpose to sum up all things in Christ, "things in the heavens and things on the earth."

Ephesians 3:10 reveals God's glorious plan, that "through the Church" God has purposed to make known His manifold wisdom to the principalities and powers "in the heavenly places." You see, as the Body of Christ on earth agrees with its Head in Heaven, the Spirit of Christ Himself displaces the powers of darkness in the heavenly places.

When the Church on earth is aggressive in its agreement with the will and Word of God, then the presence of God increases in the spiritual realm, proportionally displacing the influence of Hell on earth. Shortly thereafter, manifesting in the world of men, we see revivals, healings and miracles. But when the Church is passive, indifferent or carnal, the powers of Hell increase their rule over the affairs of men: marriages break up, crime increases, and wantonness becomes unbridled. We must see that our prayers, attitudes, and agreement with God are an integral part of establishing the reality of the Kingdom of God on earth!

THE WEAPON GOD HAS GIVEN US

From the spiritual realm satan works to corrupt and control the mind of man through illusions built from mankind's carnal desires and fears. But the power of the lie is not merely the speaking of falsehoods, nor is it that this world is an illusion. The lie of the enemy appears most powerfully when men believe that this world, as it is, is the ONLY world we can live in. The truth is, of course, that God is establishing His Kingdom, and ultimately, every other reality will submit to and be ruled by that Kingdom! (See Hebrews 12:26-28; Revelation 11:15.)

The weapon God has given us to combat the lies of the enemy is the Word of God, which the Scriptures refer to as the "sword of the Spirit" (Ephesians 6:17). Jesus said His words "are spirit and are life" (John 6:63), which is to say that the substance or meaning in Christ's words represents an actual reality: the living Spirit of the Kingdom of God.

The ancient Greeks, in whose language the New Testament was written, had no word for "reality." To them "truth" and "reality" were the same essence. If we seek to experience the true work of the Holy Spirit, we should understand that the Spirit has been sent to establish the reality of God's Kingdom in the lives of Jesus' followers. Thus, as we become one with the Spirit of Truth, and as we fully embrace the Word of Truth, we are brought into the reality of God Himself!

This point is essential: in our war over who controls man's world, the singular weapon God has given the Church is His Spirit-empowered Word. The living Word of the Spirit is the truth.

Paul taught that spiritual warfare deals specifically with the "pulling down of strongholds."

But what are those strongholds?

They are lies the devil has sown into our thought-processes which, as we accepted and believed them, became reality to us. We do not fall in sin as much as we are seduced by it; every sin is cloaked in some measure of deception. But as these lies are uncovered and destroyed, as our thought-processes are freed from illusions, we will discover the blamelessness, perfection, and truth of Christ in us, the hope of glory (see Colossians 1:27).

To be successful in life (COME TO KNOW AND IMPLEMENT GOD'S PURPOSE FOR OUR LIFE) we must know the Word of God. For all things come into being through the Word. It is the Word made alive in our hearts (through repeated affirmation and meditation), that builds our faith, and wins the war over reality. 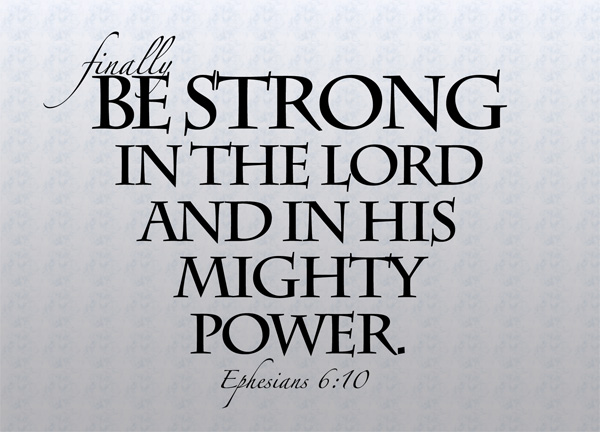