REVEALING THE LIGHT OF ETERNITY

When Jesus went up the mountain with three of His disciples, he was transfigured or altered from His human state to a glorified one (Matthew 17:1-9). It was a fearful moment of splendor as the Son of Man revealed His heavenly identity and manifested His glory in human form.

HIS BRILLIANCE WOULD BE EXPOSED AGAIN
Jesus declares to His disciples "Tell the vision to no one until the Son of Man is risen from the dead." (Matthew 17:2). This was indicating that there would be a time that this manifest presence of Jesus, in all its blinding brilliance, would be revealed and exposed to the world.

"His face shone like the sun, and His clothes became as white as the light..." Matthew 17:9. The word "shone" is a derivative from the Greek word "Lampos" or "to shine with brilliance." The color of His clothing was "white as the light" which is "Leukos," the word for "white light" or "fire." Jesus had become a brilliant, radiant white flame that caused the disciples to collapse to the ground in terror. This was a prophetic keyhole into the future which would be accessible to all after His resurrection.

"WHITE LIGHT" REVEALED AGAIN AT THE EMPTY GRAVE
In Matthew 28 we see this brilliant glory revealed again where the Body of Jesus had been laid. We see again the same "white-Leukos" or brilliant light that is white like snow and bright as lightning. The angel appears in the same glory that Jesus revealed on the Mount of Transfiguration.

The awesome presence and power revealed to the world in all of His amazing glory on the mountain, then later at the empty grave, is for a much larger, dynamic purpose. These manifestations were not just showcasing His stunning brilliance, but rather it was to confirm His resurrection and life to the world--past, present, and future.

"WHITE LIGHT" AND "FIRE" NOW DEFINES THE REALITY OF THE CHURCH
This becomes even more clear as we hear the description of the harvest as Jesus exhorts His apostles: "Do you not say, 'There are still four months and then comes the harvest'? Behold, I say to you, lift up your eyes and look on the fields, for they are already 'white' for harvest!" (John 4:35). The same Greek word used at the Mount of Transfiguration to describe His glory and the same vivid language at the empty grave of a resurrected Jesus now defines the living reality of the Church -- Leukos: brilliant with light and fire!

We see now that the engine of the Gospel message that drives it into the world--is His presence and glory -- an illuminating light that leads the world to Jesus and becomes the pillar of fire that leads His Church in revelation concerning seeking and pursuing God's purpose for their life.

"To whom God would make known what is the riches of the glory of this mystery among the Gentiles, which is Christ in you, the hope of glory..." (Colossians 1:27).

A CALL TO ADVANCE GOD'S KINGDOM IN THE EARTH
Our job description now is to reveal the Light of eternity in a dark world void of it
In Luke 10:2, harvest is literally mentioned three times, "Then He said to them, 'The harvest truly is great, but the laborers are few; therefore pray the Lord of the harvest to send out laborers into His harvest." The word "laborer" can be interpreted in the ancient text as "toiler or teacher."

Affirmations:
I AM LIGHT TO THE WORLD AND AM HERE TO TRANSFIGURE AND TRANSFORM IT.

I AM A CITY SET UPON A HILL THAT CANNOT BE HID.

I AM THE TRANSFIGURING LIGHT OF HIS PRESENCE AND AM THE ONLY HOPE OF THE WORLD TO SEE IT. 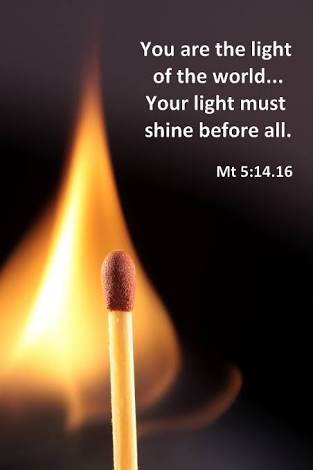